What is Opioid Dependence?

The NIDA defines dependence as “a state in which an organism functions normally only in the presence of a drug.” Dependence “develops when the neurons adapt to the repeated drug exposure” and are only able to fire normally when the drug is in the person’s system. This occurs when someone takes opioids because they are habit-forming and their use changes the way the brain works.

Opioid dependence also results in withdrawal symptoms, which can be both physical and psychological. They are not usually life-threatening but can be painful.

If you’re struggling with opioid dependence, call 800-821-3880 ( Who Answers?) now to speak with a treatment advisor.

Why Does Opioid Dependence Occur?

A study from the NCBI states that “opioid dependence… stem[s] from changes in another important brain system, involving an area on the base of the brain––the locus ceruleus.” Neurons in the locus ceruleus create the chemical noradrenaline and “distribute it to other parts of the brain” where it helps to stimulate:

The process of growing opioid dependence within the brain of an opioid user essentially follows this pattern: 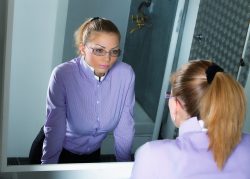 Over time, the body becomes dependent on opiates and you feel unwell if you don’t take them.

Chemically, this is part of the explanation for opioid dependence. But someone who takes opioids for a long period of time will begin to feel as if he or she need the drug in order to function. It is a feeling that many people experience, whether they are abusing the drug or not.

Those who become dependent on opioids often experience many problematic symptoms. This is why opioid medication is not always recommended for every type of patient. The NIDA states that “physical dependence is a normal adaptation to chronic exposure and is not the same as addiction.” That being said, it can be lead to other problems.

“Dependence is often accompanied by tolerance,” and, for some people, this can lead to addiction (NIDA). Patients who take more of the drug than they were prescribed or those who take the drug after they no longer need it are considered to be abusing opioids. This behavior, which can sometimes stem from dependence and tolerance, can lead to addiction and other possible dangers like overdose.

Who Becomes Dependent on Opioids?

Many different kinds of people can become dependent on opioids. Those who abuse the drug for a long period of time are sure to become dependent. According to the NLM, “about 9% of the population is believed to misuse opiates over the course of their lifetime, including illegal drugs like heroin and prescription pain medications such as Oxycontin.”

What many people do not know is those individuals who take prescription opioids as recommended by their doctors also become dependent on the drugs after taking them for a while. This is why doctors sometimes recommend that a person take the drug only when he or she needs it or for a certain period of time. Even then, dependence still occurs. The NLM states, though, that “the time it takes to become physically dependent varies with each individual,” so doctors are not always able to prevent this outcome.

Those who are not abusing opioids can become dependent on them, so developing a dependence on these types of drugs does not mean that you were doing something wrong. You will simply need to be treated for your dependence which is separate from opioid addiction treatment.

Am I Dependent on Opioids?

If you answered yes to these questions, you are likely already dependent on opioids and should be concerned about whether or not you may have built up a tolerance for them or even an addiction.

How Do You Treat Opioid Dependence?

Some patients who are dependent on opioids can be treated by their family doctors and weaned off the medication slowly. Others may need to go to a detox clinic for more intense treatment. Either way, opioid dependence is common and completely treatable. The concern lies with the possibility that one might begin to abuse opioids or become addicted to them as a further step. “For this reason, physicians need to be vigilant and attentive to their patients’ symptoms and level of functioning to treat them appropriately”.

The NIDA Teen states that “dependence means that the body gets used to the presence of the drug.” This is why it is more common and not as alarming as addiction and why it causes mild to painful withdrawal symptoms. It does occur in many cases of both medicinal opioid use and opioid abuse. While it may not be as dangerous as other outcomes, it can lead to other, more dangerous symptoms such as tolerance, abuse, and addiction.